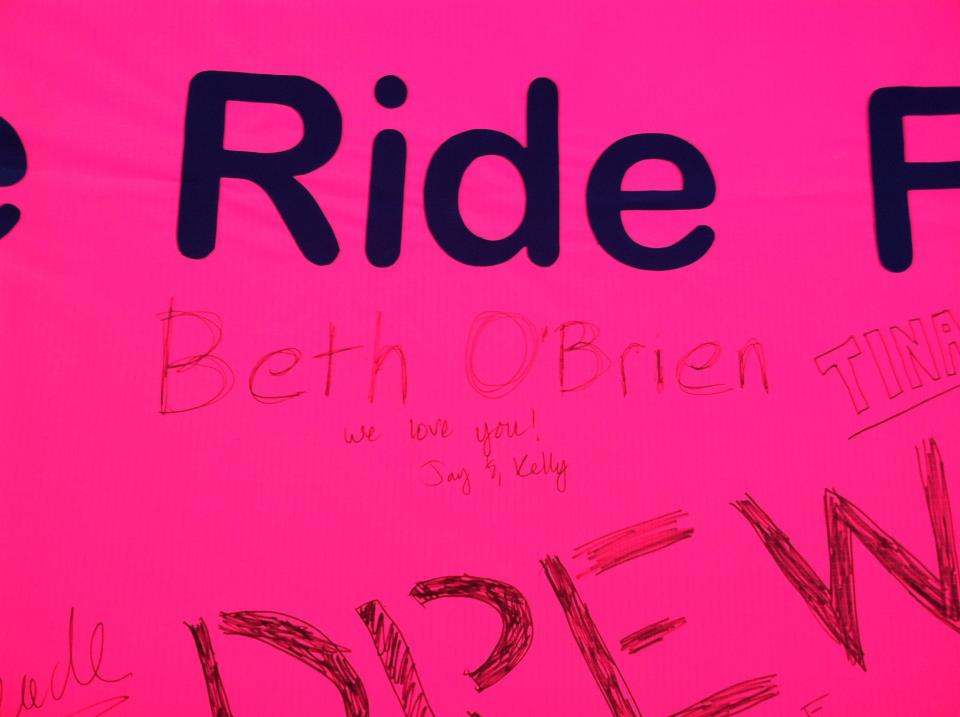 As the emotional high of 2012’s PMC journey gives way to cherished memories and renewed hope, my thoughts hang on the friendships I’ve gained or strengthened through this year’s PMC effort and the woman for whom I rode, Kelly’s mother Beth O’Brien.

I made a promise to our sponsors this year that if we met our fundraising goal of $5,000, I would start my ride a day early at the New York state border. As the event drew closer, I was touched and relieved that our sponsors had come through. And weeks before the ride, my friend Scott called me to share some news: he wanted to ride Day 0 with me. Scott didn’t own a road bike and, by his own admission, he was not physically ready for a 93 mile ride that packed in over 4000ft of climbing. He knew that he would be seriously tested to finish the ride, but that didn’t phase him.

Scott and I have been friends for over 10 years, but it’s rare that we spend time together 1-on-1. Without many words, he made it clear that the goals of the Pan-Mass Challenge had resonated with him. As I made our lodging arrangements for the overnight stay in West Stockbridge, I realized that our friendship was deepening through the PMC. Kelly and I picked him up the Thursday before the PMC as we made our way west to start the following morning. Scott’s signature blend of optimism, enthusiasm and humor was, like always, a welcome addition to the weekend.

Just after sunrise, my dad and his wife scouted out a breakfast diner near the NY border and flagged us down. They had driven out with us and stayed overnight so that my dad could see me off on this trek. It was pretty special to give him a hug and hear him say that he was proud of me before we rolled out. Not that my dad is shy with that sort of thing, but it did confirm for me, on every level, that I was doing something worthwhile. At 7:00, we snapped a picture under the Welcome to New York sign and PMC2012 was underway. Briefly.

Barely 7 miles in, a rear wheel I had been nursing along through a foolish series of partial rebuilds finally cried “Uncle!” A spoke snapped, sending the wheel horribly out of true. It wouldn’t even rotate through the rear stays of the frame — my bike was unridable. What were we going to do? We were riding these first 93 miles unsupported. My dad and Kelly were already miles down I-90 at this point. Who could repair my bike in Stockbridge at 7:30 in the morning? A toxic mix of disbelief and frustration began to set in. I had momentarily forgotten that this was the Pan-Mass Challenge; that my duty was to “commit, and figure it out.”

And that’s when a key lesson about the PMC so justly punched me in the face: do your part selflessly, and others will have your back. 20 minutes after my bike called it quits, a fellow PMC rider who would join me in Sturbridge the following morning recognized our situation and came to our aid. He drove us 7 miles to the local bicycle shop, making himself late for work in the process. And what were the odds that, when we arrived at the LBS, a manager of Berkshire Bike & Board in Great Barrington was there early and willing to help us? In no time I was back on the road with a brand new rear wheel — a $500 part loaned to me for no more than a promise to send it back when I was done, and best wishes for the 3 day ride ahead. Our 93 miles for the day had just become an even 100, but our spirits were high once more.

Friday’s ride would include more trying moments, especially for Scott. Jacob’s Ladder on Rt 20 and the 3-mile 6% grade at the beginning of Rt 66 got the better of him. But when I asked if he wanted to call it off, he protested vehemently. The slower pace we kept wore on me too; it meant hours of extra saddle time in 90° heat and peak sun. I knew that I’d feel these effects for two more days, which made me anxious. When we reached a grueling hill on Rt 20 in Brimfield, I took off. Scott assumed I had abandoned him, but we shared a happy moment when he found me 1 mile before the finish, waiting so that we would arrive together. After a meal, a couple of beers and a few introductions, Scott left the Sturbridge Host for home. I hope that he’ll be back next year.

Friday night was hectic, as riders from 9 different countries poured into the Host hotel for their registration packets and to watch the opening ceremonies. Kelly and I were so busy preparing logistically for my ride and her volunteering that we unfortunately didn’t get to see them. We finally made it to bed just after 10pm, alarm clocks set for 3:45am. I got to be lazy and sleep in until 4:30. An hour later, the event she and I had been preparing for since April officially began. As I pushed towards the front of the pack during the first 20 miles, looking for Ornoth, I felt shaky. I had skipped breakfast. My heart rate was unjustifiably high and I was sweating too much. I would have to pace myself, hydrate rigorously and ride smartly. I couldn’t afford to blow up.

I eventually found Orny, and we rode about 30 miles together on Saturday. The highlight of Day 1 was Cherry St in Wrentham, affectionately referred to as The Smile Mile. The street is known for its supportive residents who line the road with signs, live musical performances, refreshments and cheering kids. As Orny and I cruised down their shaded lane, hands in the air to clap for these families, their gestures of gratitude and support made me temporarily forget the oppressive heat and humidity. I high-fived a group of boys who were eagerly offering to anyone who take them up on it. Awesome.

The remainder of Saturday’s ride was hot but, because of the hard work of the rest stop volunteers, manageable. At the Lakeville stop, my personal favorite, Kelly’s father Joe was waiting to welcome me and cheer me on. He had driven down that morning from Quincy to see the riders and volunteers he’d listened to me talk about for almost a year. It was great to see a familiar face, and I could see in his that he was touched by the sheer scale and combined good will of the event. He got a kick out of watching me recline on the massive bags of ice set aside for just that purpose, too.

Throughout the evening on Saturday, I had been dealing with mild heat stroke and dehydration. When I couldn’t fall asleep by 10pm, Kelly set out from our tent and returned with bags of ice to pack me in. That worked, and I finally got some sleep. We awoke at 3:45 to break down our tent and haul our gear to the road crew van that Kelly was assigned to. After seeing her off, I returned to the main tent for some breakfast, which I ate while seated atop a manhole cover — it was the only dry seating to be had. There is no mass send-off for Day 2, so when I had finished breakfast, I found my bike and cautiously pedaled in darkness towards the Bourne bridge. By the time I reached the far side, the sun was up and the ride was on!

Like Saturday, Sunday morning was shaky for me as well. More elevated heart rate, more unjustifiable perspiration, irregular breathing. It was not my strongest start, but after 15 miles or so I settled into a rhythm. I made a quick stop at one of the medical vans early on to tape my nipples up, as they had started to chafe somethin’ fierce from the humidity. Ornoth rolled by just in time to witness my mummification, which he found amusing. But this was perfect: my body felt capable, the weather looked favorable, and my good friend had just arrived to finish this journey with me. This was going to be a day to remember.

The Barnstable rest stop is known for its popsicles, which really do hit the spot — odd for 7am, but I refuse to question it. Shortly thereafter, I was treated to a sun shower like I hadn’t seen in years. Gentle rain fell despite almost blinding morning sunshine and blue skies. As I rode through rolling sand dunes and sea grass, I took stock of how lucky I was to be there at that moment, healthy and active. This had to mean something. I thought to myself, maybe we’re closing in on a cure. It was time to start thinking about Beth. She would occupy my thoughts for the rest of the ride. This was for her.

I don’t always have the courage to hit back in life. But when cancer threatens someone you care about, you hit back, and that’s what the PMC is — it’s hitting back with everything we have. Our sponsors pack the real punches, but as Sunday’s ride drew to a close, it was my turn to hit. Through the hilly, wind-swept dunes of Race Point, I pushed until my legs burned, and then I pushed harder. Tucked in the drops, I ramped my cadence up with each breath. A few cheers from fellow riders spurred me from the saddle, and I sprinted for the final mile. Of the 2500 miles I rode this season, I know that it was my finest. At the turn for the Provincetown Inn, I sat up and waited for Ornoth so that we could cross the finish line together.

2012 was not my strongest year as a cyclist. A late start to my season so that I could finish a project long overdue put me well behind the prior 2 years. Planning our move to Florida took away more riding opportunities. And, ironically, several good biking weekends were spent in my living room, writing fundraising emails for the very ride that would test me the most. So I have to thank my good friend Paul Demers for kicking my ass to the summit of Wachusett Mountain on no less than 6 century rides this summer. Every time I asked him to come be my motivator, he showed up at my doorstep with a smile on his face and more energy in his legs than I had. I have no doubt that my PMC would have fringed on failure without Paul’s consistent support. Yea buddy!

It’s hard to say if I would have found the Pan-Mass Challenge before this year if it weren’t for Ornoth. I think it’s safe to say that I wouldn’t have volunteered in 2010 or ridden in it last year if not for my quirky pal. In fact, Orny has had more positive influences on my life than he probably realizes. I’m saddened to know that, in moving away, I won’t have my oldest cycling companion to shred asphalt with in 2013. But I won’t soon forget closing out a 300 mile epic trek across Massachusetts wheel-to-wheel with him.

Finally, we are so thankful to each one of our sponsors who helped us not only reach our fundraising goal, but exceed it by over $1,000 — a total of $6,120. Through their generosity and compassion, our 3-day effort held significance. And with continued support like theirs to all of the families who face cancer, we will conquer this disease.